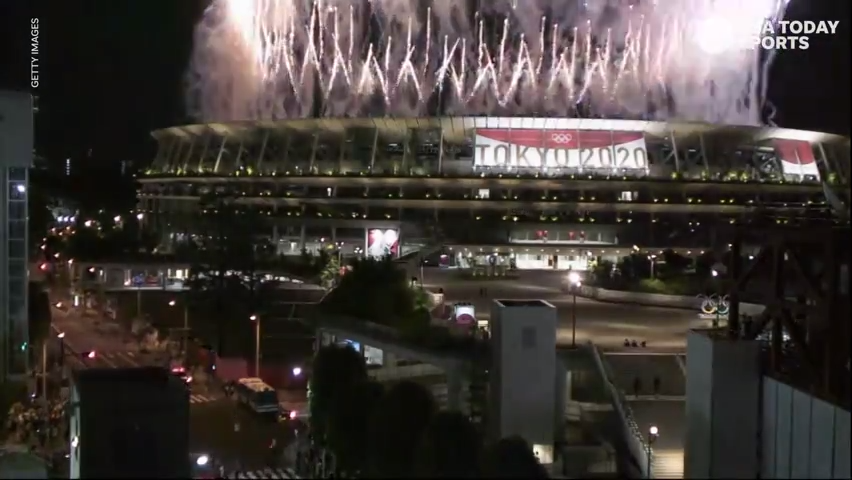 The opening ceremony officially kicked off the Tokyo Games, but competition is already underway. Saturday features some must-watch events.

The Tokyo Olympics have officially kicked off.

While some competition began earlier this week and people in the U.S. will be tuning into the re-air of the opening ceremony (7:30 p.m. ET), day two of the event will begin Friday evening into early Saturday morning.

A total of 23 sports will be played, and the medal count will begin as well as weightlifting, taekwondo, judo, fencing, shooting, archery, and cycling will be giving out medals. Other action happening includes the introducing of 3×3 basketball, U.S. softball attempting to stay perfect as they face off Mexico and the USWNT trying to bounce back from their opening game loss as they play New Zealand.

Follow along for live updates of day one of the Tokyo Olympics.

Meet Team USA: Get to know every athlete at the 2021 Tokyo Olympics

The latest in Tokyo: Sign up for our Olympic newsletter to get exclusive insight

Inside scoop to Tokyo, texted to you: Sign up for Olympic texts, where we’ll be your official guide to the Games

Mary Tucker, the 20-year-old American, finished sixth after entering the event as a favorite to medal. A rising junior with the Kentucky Wildcats, she is ranked No. 2 in the world in the event but was unable to overcome a series of uncharacteristically poor shots early in the finals.

IOC president Thomas Bach was among those on hand at the Asaka Shooting Range for the first medal event of the Games.

The latest update brings the total to 123 cases since July 1. Of the new cases, three – including the athlete – were non-residents of Japan, while the rest were Games contractors who are residents. Olympic organizers do not identify athletes by name when they test positive.

Organizers reported a three-day total of 74,528 tests from July 20-22, with 22 confirmed positives in that time.

The Age, an Australian news outlet, reported Saturday that a top government COVID-19 advisor said he did not believe organizers were prepared for worst-case scenarios.

Hitoshi Oshitani, a member of the federal government’s COVID-19 advisory panel and the head of virology at the Tohoku University School of Medicine, said the Olympic Village presents a special risk with participants sharing rooms.

Tokyo 2020 spokesman Masa Takaya said organizers had coordinated with the national and Tokyo metropolitan governments in developing the playbooks, which outline health and safety protocols for all Games stakeholders.

“We are confident that we will keep delivering a safe and secure games,” Takaya said.

The first match of the beach volleyball tournament has been canceled due to a Czech player tested positive for COVID-19.

The Czech Republic was scheduled to play Japan, but the Japanese pair of Megumi Murakami and Miki Ishii will be declared the winners by default.

In rowing, Dutch rower Finn Florijn has been ruled out of the Olympics after testing positive for COVID-19, hours before before he was scheduled to compete.

After not qualifying for the men’s single sculls quarterfinals on Friday, the 21-year-old was scheduled to participate in second chance race on Saturday. However, the Royal Dutch Rowing Federation said roughly four hours before the event that Florjin tested positive for the virus.

The women of Russian Olympic Committee defeated Japan in the inaugural 3×3 basketball game to kick off one of the new events appearing in Tokyo.

Viewers may notice a few differences from a typical basketball game. It’s played outdoors on a half court that features a 22-foot 2-point line and the winner is the first team to score 21 points or the team with the most after 10 minutes.

The U.S. men’s team failed to qualify for the event, but the women’s team is in Tokyo. They will play their first game against France at 4:55 a.m. ET.

Taylor, 34, made her debut during NBC’s opening ceremony replay of the Tokyo Olympics on Friday night.

NBC said Taylor will be a host and contributor for Football Night in America and Super Bowls. While at the Olympics in Tokyo she will join Mike Tirico as host for Prime Plus and will also serve as a correspondent.

Taylor’s arrival comes after a story from The New York Times detailed a recording of former ESPN colleague Rachel Nichols questioning Taylor’s position at ESPN because of its spotty record on diversity and hiring practices.

Sam Mikulak is still the backbone of the squad.

Despite finishing fourth at the Olympic Trials, Mikulak will anchor the Americans on all six events during qualifying at the Tokyo Games on Saturday. National champion Brody Malone is up third on each event.

Four gymnasts compete on each event during qualifying, and teams count their three highest scores. While strategies can differ, many teams will put their strongest, or most consistent, gymnast up last.

Mikulak struggled at both the national championships, where he finished third, and trials. But he has been the best the U.S. men have had for much of the last decade, a six-time national champion who is competing in his third Olympics, and that experience will be invaluable for the young U.S. team.

The Olympics are the first major international competition for Malone, 21, who won his second NCAA title two months before nationals. The other two team members, Yul Moldauer and Shane Wiskus, also are first-time Olympians, though both have competed at the world championships.

World No. 1-ranked archer Brady Ellison was 12th early on and seventh halfway through the Olympic men’s ranking round Friday at Yumenoshima Park.

But he better adapted to the wind over the final six 70-meter ends, shooting no lower than 57 (out of 60), and finished second in a field of 64 behind South Korea’s Kim Je Deok. Kim shot 688, six points ahead of Ellison of Globe-Miami, Arizona.

Already a three-time Olympic medalist, Ellison, 32, could win three more in Tokyo starting with a new mixed team event to be decided Saturday. He will shoot for the U.S. with Mackenzie Brown, who finished fifth in the women’s ranking round.

The U.S is ranked second in mixed, based on the ranking scores, behind Korea. The U.S. women are ranked third and the men fifth for those team events.