In our series of Hard Disk Drive guides, here’s the latest update to our list of recommended HDDs. All numbers in the text are updated to reflect pricing at the time of writing.

Data storage requirements have kept increasing over the last several years. While SSDs have taken over the role of the primary drive in most computing systems, hard drives continue to be the storage media of choice in areas dealing with large amount of relatively cold data. Hard drives are also suitable for workloads that are largely sequential and not performance sensitive. The $/GB metric for SSDs (particularly with QLC in the picture) is showing a downward trend, but it is still not low enough to match HDDs in that market segment.

In terms of new product introductions since the release of the last HDD guide, we have retail availability of Toshiba’s 16TB N300 and X300 drives. The 18TB drives using FC-MAMR are also scheduled to make a retail appearance later this year. Seagate had launched the Ironwolf Pro and Exos 18TB drives last year, and no new capacity updates have been announced for this season yet. The same is the case with Western Digital – The 16TB and 18TB WD Red Pro models were introduced last September. The company did make the OptiNAND announcement in August 2021 – promising the integration of UFS storage in their 20TB+ HDDs in order to improve performance and reliability. With the HDD supply chain seeing some improvements, prices have largely stabilized.

Synology has introduced 8, 12, and 16TB enterprise hard drives (rebranded Toshiba Enterprise HDDs with custom firmware), but they are meant specifically for Synology NAS units (no warranties if used in other systems) and are not part of this buyer’s guide. Toshiba’s MG09 18TB HDDs based on FC-MAMR are yet to get retail availability, and are also not part of this buyer’s guide 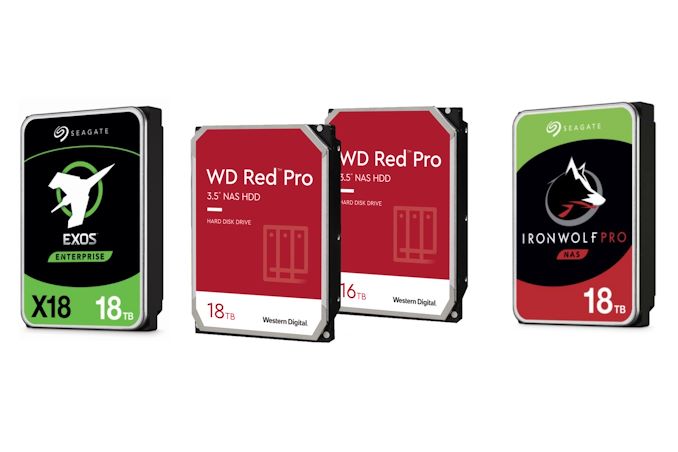 From a gaming perspective, install sizes of hundreds of GBs are not uncommon for modern games. Long-term backup storage and high-capacity NAS units for consumer use are also ideal use-cases for hard drives. The challenge in picking any hard drive, of course, is balancing workload needs with total drive costs. Most consumers in a non-business settings also require low-power and low-noise, yet, high capacity drives, which we’re including as an explicit category as well.

Overall, if absolute lowest cost and highest capacity are the only requirements irrespective of the use-case, then the Seagate Exos X18 fits the bill, with unbelievably low prices compared to other ‘consumer’ HDDs at similar capacity points. At other capacity points, the most cost-effective drives vary even when similar workload ratings are considered. It must be noted that the Exos series drives are relatively noisy and consume much more power compared to other drives tuned for specific use cases – such as the Barracuda Pro and Toshiba X300 for desktop usage, or the WD Red SMR drives for read-heavy / sparing writes scenarios.

Consumers looking to purchase hard-drives need to have a rough idea of the use-cases they are going to subject the drives to. Based on that, a specific set of metrics needs to be considered. We first take a look at the different metrics that matter, and how various hard drives stack up against each other. Since many hard drive families from different vendors can satisfy the requirements, it may all come down to the pricing. We will present a pricing matrix for various hard drive families against the available capacities.

For our guide, we’re narrowing down the vast field of hard drives to the following models/families. In particular, we are excluding surveillance-focused drives such as the WD Purple or Seagate SkyHawk, since these drives are based on the same technology, but often carry a price premium. Meanwhile, we’re also making sure to include some of the enterprise / datacenter SATA drives that are available for purchase from e-tailers, as these sometimes offer some great deals in terms of capacity-per-dollar.

A few notes are in order – the WD Ultrastar DC lineup which used to be in our earlier guides is not widely available in the North American retail market. We have replaced it with the WD Gold series. Toshiba’s MG08 series includes a 9-platter 16TB CMR model. However, it is again enterprise-focused, and the retail market has to make do with the N300 and X300 drives for NAS and desktop systems. That said, the specifications are very similar, as we noted in the launch article.

One of the easiest ways to narrow down the search for a suitable hard drive is to look at the target market of each family. The table below lists the suggested target market for each hard drive family we are considering today.

After filtering out models that don’t apply to your use-case (as an example, for usage in a 4-bay NAS enclosure, one could rule out the Toshiba X300 straight away), we can then take a look at how the specifications of various drive families compare.

Based on these metrics, it is clear that the enterprise drives (Seagate Exos Enterprise and WD Gold) are rated to be more reliable in the long run over a big sample set. However, most consumer use-cases do not need a 550 TB/yr workload rating. 180 – 300 TB/yr workload rating is plenty reasonable for most users when the drives are going to be used as part of RAID arrays.

The BarraCuda Pro strikes a nice balance across many metrics, but it is rated only for 300K load / unload cycles. It also doesn’t have the RV sensors present in the rest of the drives (other than the Toshiba X300).

In considering the non-enterprise drives, we note that the ‘Unrecoverable Read Errors’ metric is 10x worse for the WD and Toshiba drives compared to the Seagate ones. The MTTF metric for the IronWolf Pro is slightly better than the other drives (at 1.2M vs. 1M hours).

One of the aspects not mentioned in the above table is that the WD Red SMR drive is in the 5400 RPM class, while the other drives (including the Red Plus) are all 7200 RPM. Despite similar spindle speeds, the Red Plus firmware is optimized for a low noise profile across most capacity points. It might not win out on benchmarks, but possesses qualities that are important for some consumer use-cases. Another aspect to be kept in mind is that the WD Red line is now exclusively SMR-based, with the CMR drives moving to the WD Red Plus line. Unless the consumer is technically savvy enough to understand the pitfalls of SMR and its applicability to the desired use-case, the SMR-based WD Red line is best avoided.

The matrix below shows the current pricing for each available capacity point in all the considered hard drive families.

The desktop storage market is a straight shoot-out between the Seagate BarraCuda Pro and the Toshiba X300. Seagate opted to stop releasing BarraCuda Pro drives above the 14TB capacity point, but Toshiba has a 16TB X300 available for purchase. The Toshiba X300 is consistently priced lower than the Seagate BarraCuda Pro. However, the higher capacity versions of the Toshiba X300 use 9 platters, and consume more power compared to the corresponding BarraCuda Pro. The Seagate pricing also includes data recovery service during the warranty period. For the extra cost at certain capacity points, we get a much higher workload rating, better reliability, and three extra years of warranty. So, this is a case where the benefits could outweigh the cost. That said, the Seagate Exos Enterprise at the 16TB capacity point presents the lowest $/TB metric, and wins our recommendation for this market segment despite the high power usage and noise factor. If a silent drive with relatively low power consumption is needed, the low price of the X300 series could be an attractive alternative.

Prior to commenting on the other possible use-cases, one thing is clear from the above pricing matrix – if you absolutely require 18TB per disk, the WD Gold, WD Red Pro, Seagate IronWolf Pro, and the Seagate Exos Enterprise are your only choices for purchase in the retail market currently. The Chia Coin craze seems to have tapered off, with the availability and pricing of these 18TB models improving considerably.

On the SOHO / SMB NAS front, the Seagate Exos series and WD Gold, despite their enterprise background, continue to make a good case across multiple capacity points. The only places where the WD Red series (Pro and Plus) could edge out as a better choice are scenarios where the power consumption and noise need to be kept low. After poring over the datasheets, we have come to realize that the WD Red Pro actually has a better power consumption profile and acoustics across multiple capacity points compared to the WD Red Plus. We have updated our recommendations accordingly.

The 6TB WD Red is also among the lowest-priced 6TB drives currently in the table, but it is a SMR drive and is not recommended for most use-cases. The IronWolf NAS models deliver slightly better performance compared to the WD Red / WD Red Plus, but, have correspondingly higher power consumption numbers. On the SMB / SME NAS front, the WD Red Pro has started reaching better price points compared to previous quarters, managing to undercut the IronWolf Pro across almost all capacities. However, a plus point for the IronWolf Pro is the inclusion of the Data Rescue Service for a 3-year period in addition to the usual warranty.

Based on the above analysis, the recommendations for the NAS drives are clear – for the absolute highest capacity drive currently in the market (if you have to compulsorily get one) – Seagate Exos EnterpriseIronWolf Pro, WD Red Pro when performance is not as important as overall power consumption and low noise profile, and the Seagate IronWolf otherwise. This is assuming that the user has adopted the 3-2-1 backup rule and doesn’t foresee the need for a data recovery service (DRS). The IronWolf Pro NAS and the BarraCuda Pro both bundle the DRS. This needs to be taken into account while considering the pricing difference against other drives in the same capacity class.

Finally, a note on shucking – buying a relatively cheap external hard disk (such as the 14TB Western Digital Elements with a re-labeled / firmware-modified WD / HGST Ultrastar HC530 DC for $270), removing the internal drive, and using it in a NAS or as an internal desktop drive in the place of a more costly drive ($380). While this is easy enough to do, the user experience might not be optimal – obtaining warranty services is pretty much ruled out, the default TLER settings might need alteration (which is not always possible with commercial off-the-shelf NAS units) and so on. We believe this is not worth the trouble for most readers unless the money spent is to be treated as sunk cost, and the drive is going to be used in non-critical scenarios.