Welcome to The National Today newsletter, which takes a closer look at what’s happening around some of the day’s most notable stories. Sign up here and it will be delivered directly to your inbox Monday to Friday.

“Operation Liberty,” as Guaido has dubbed it, has enlisted the support of some army officers and rank-and-file soldiers, and there are calls for more to defect to the cause.

The 35-year-old opposition leader is promising the largest political demonstrations in the country’s history tomorrow, but tens of thousands are already in the streets of Caracas and other cities showing their support for the uprising. 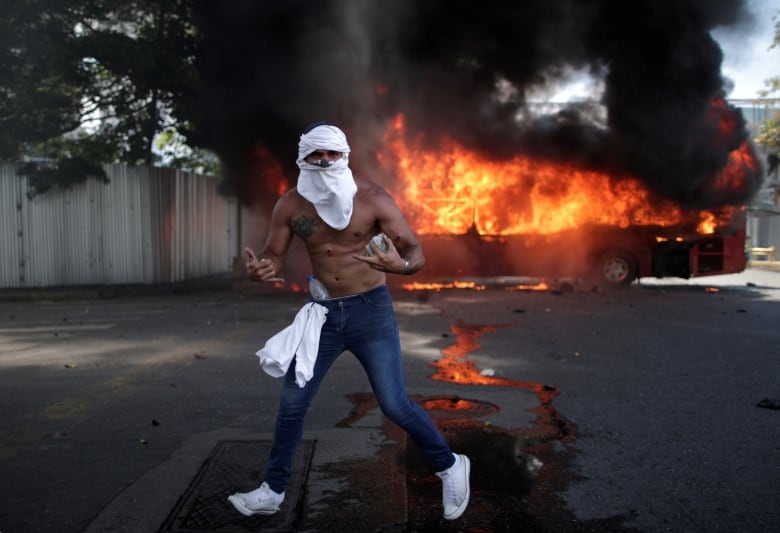 An opposition demonstrator gestures in front of a burning bus, while holding a rock, near the Generalisimo Francisco de Miranda Airbase in Caracas. (Ueslei Marcelino/Reuters)

Police have used tear gas and water cannons against the crowds and national guard vehicles have been filmed driving into a cluster of stone-throwing protesters.

Guaido is telling his supporters that “the time is now” to overthrow the socialist regime, while Maduro has promised to show “nerves of steel” in facing down the attempted coup.

Whatever the outcome, it’s a significant escalation in the crisis that has gripped the country since Maduro’s disputed re-election almost a year ago.

Annual inflation hit more than 1.3 million per cent last year, and almost 80 per cent of Venezuelan households can’t afford enough to eat. Major blackouts have hobbled what’s left of the economy and millions of people have fled the country.

More than 50 countries, including Canada, the U.S. and the U.K., already recognize Guaido, who heads the opposition-controlled National Assembly as the country’s interim president.

But today, there’s little question that his strongest support is found in Washington.

The White House won’t say whether it had advance knowledge of the coup attempt, but Mike Pompeo, the U.S. secretary of state, used an event in Washington last night to issue a stern warning to Maduro’s few remaining international backers.

“Maduro is going to leave,” he said, claiming that the governments of Cuba, Russia and China “will be in a far better place if they choose a different path,” and side with the Venezuelan opposition, making note of sanctions that the U.S. government has recently imposed against Havana.

And just yesterday, in an interview with the Miami Herald, Guaido claimed that Cuba has dispatched as many as 40,000 military and intelligence advisors to Venezuela, including 2,500 who are there to “track and persecute” opposition supporters within Venezuela’s armed forces.

For the moment, however, it doesn’t appear that the Americans intend to dispatch their own forces to Venezuela. Or even pay for somebody else’s soldiers. 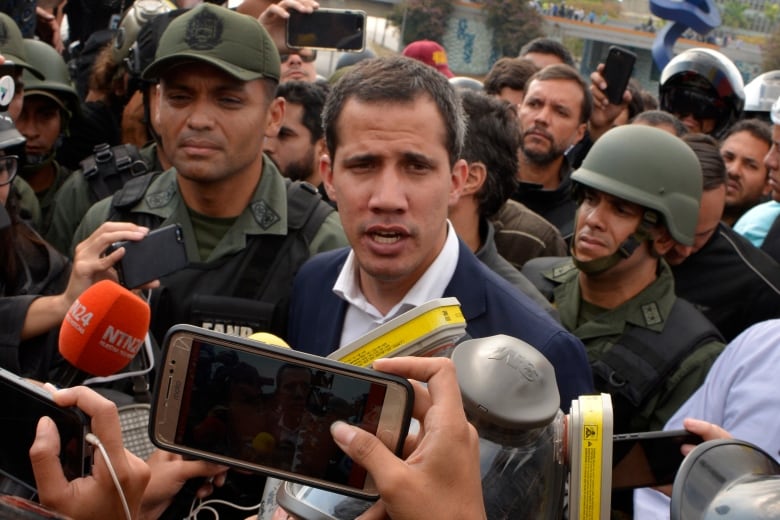 Reuters reported Tuesday that the White House turned down a recent proposal from Erik Prince, the founder of the mercenary firm Blackwater, to hire and dispatch up to 5,000 private soldiers to support Guaido’s efforts to topple Maduro.

The plan was reportedly judged too dangerous and “far-fetched,” although Prince’s own political baggage might have also been an issue. House Democrats are pushing the Justice Department to open an investigation into whether the security contractor lied to Congress about his efforts to act as a go-between for the White House and the Kremlin, as detailed in the Mueller Report.

What Guaido does have going for him is financial muscle.

And the Americans have been busy trying to cut off Maduro’s access to foreign funds, imposing sanctions and stepping in to pressure the Bank of England to deny the Venezuelan government’s request to transfer $1.2 billion US in gold stored in their U.K. vaults. Or, more recently, leaning on the International Monetary Fund to close a $400 million US line of credit.

Antonio Guterres, the secretary general of the United Nations, is urging both sides in Venezuela to avoid violence and focus on a negotiated solution.

But there are also indications that Guaido might have launched his coup before he was fully ready. So far, the uprising seems to be lacking support from the military’s top brass. A function, some report, of the opposition leader moving up the date because Maduro was about to carry through on his threat to have him arrested.

Bracing for an expensive BBQ season

As African swine fever hits China, CBC News Senior Business Correspondent Peter Armstrong explores what that means for Canadian pork prices and the future of the pork industry in Canada.

Attention breakfast lovers and barbecue enthusiasts; the prices of bacon, ribs and pork chops are set to rise this summer. A swine fever sweeping through Asia has forced officials in China to slaughter millions of hogs. That’s prompted a global shortage, which is already driving up prices.

“Inventories in Canada are starting to be depleted,” says Sylvain Charlebois, professor of food distribution and policy at

Dalhousie University. “Grocers who want to sell us bacon and ribs will become increasingly desperate to find product to sell us especially during the BBQ season.” 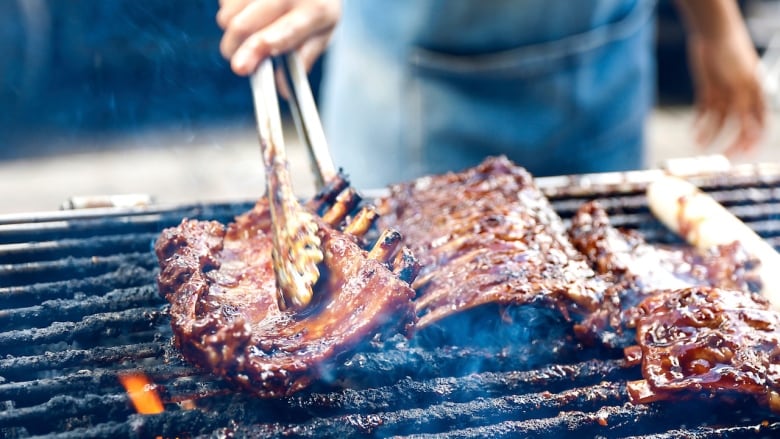 A global pork shortage could be driving up prices during this year’s barbecue season. (Credit: iStock/Getty Images)

China makes up nearly half the global pork consumption market. So, any disruption there has vast and profound ripple effects on the rest of the world.

Murray Thunberg raises five different breeds of heritage pigs on his farm in Cambridge, Ont. Looking out over a field of American Hereford, Gloucestershire Old Spots and British Saddlebacks, Thunberg isn’t so worried about the impact on price. His biggest fear is what will happen when and if African Swine Fever is found on a North American pig farm.

“It’s a really scary time,” he says, adding that’s the appeal of his heritage breeds of pig.

“They were bred not only for maternal instincts and good legs but they were built for strong immune systems,” he says.

“You have to wonder if we stuck with the old way of doing things that we could have bred resistance to a lot of these diseases.” 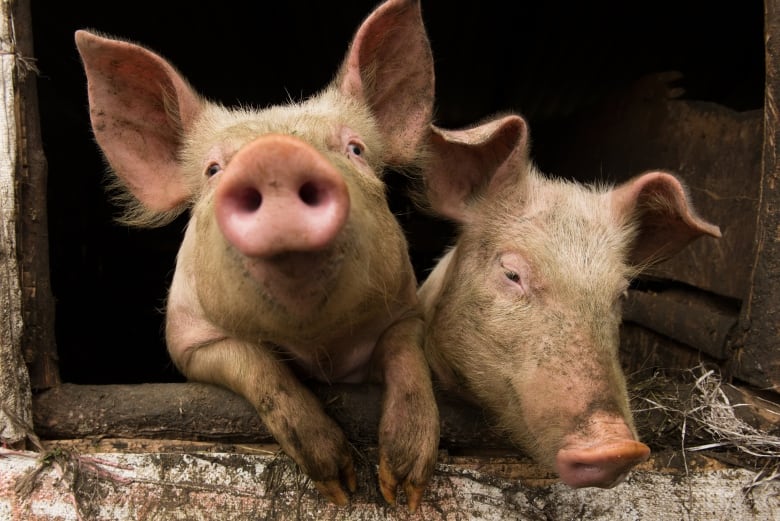 The U.S. Department of Agriculture warned there is a “high” likelihood that the disease could enter the U.S. through the illegal import of pork products.

Charlebois says a single case found on a Canadian farm would have an immediate impact.

“If we get a case, we could actually re-experience what we saw in 2003 with mad cow where overnight we saw 35 countries issue an embargo on Canada’s cattle industry and cattle futures went down 70 per cent overnight,” he says.

Bacon prices have already soared, though most of us haven’t noticed. Charlebois calls it the shrinkage phenomena. A 500 gram package of bacon used to cost around $5. Over the past few years, that package has quietly “shrunk” to 375 grams without changing price. He expects that will continue this summer.

“Less for more” isn’t exactly the summer slogan pork enthusiasts were hoping for.

The National will be delayed on the CBC television network tonight due to the NHL playoffs. The show will air at its usual time, 9 p.m. ET, on News Network and online.

Quote of the moment

“Both cyclones have shattered families and destroyed livelihoods. The loss of life is devastating. Those who were already living on the brink of poverty have now been left with nothing … We’re facing a critical situation.”

–Nicholas Finney, a response team leader with Save the Children, on the effects of Cyclone Kenneth, the second major storm system to hit Mozambique in the past six weeks.

What The National is reading

Spoiler: Not bloody likely. But there’s a certain delight in hearing Keith Morrison use his still scary pre-Dateline voice to talk about an “equal, effective and elected” upper chamber.

Sign up here and have The National Today newsletter delivered directly to your inbox Monday to Friday.