Using his favourite policy weapon, Trump loaded a tweet into the chamber and fired away at the Fed on Tuesday, urging the central bank to lower its benchmark interest rate by as much as a full percentage point from its current range of between 2.25 and 2.5 per cent.

“Our Federal Reserve has incessantly lifted interest rates, even though inflation is very low, and instituted a very big dose of quantitative tightening,” Trump said.

“We have the potential to go up like a rocket if we did some lowering of rates, like one point … with our wonderfully low inflation, we could be setting major records &, at the same time, make our National Debt start to look small!”

After keeping its rate at effectively zero for the better part of a decade in order to stimulate the economy, the Fed has ratcheted its rate up eight times since Trump became president, to keep inflation under control as the economy and job market have improved.

A cut of a full percentage point would take the U.S. benchmark interest rate back to where it was in December 2017.

The Federal Reserve is currently in the midst of a two-day meeting to discuss where to set its rate, and on Wednesday they are expected to announce they have decided to keep it right where it is.

It’s not the first time Trump has asked the Fed for lower rates, which makes the cost of borrowing cheaper and tends to encourage consumers and businesses to spend and invest.

As a candidate in 2016, he was critical of the central bank for keeping interest rates low, because he thought it favoured his Democratic opponent by stimulating the economy.

Governments often take great pains to avoid being seen as trying to influence the monetary policy of the country’s central bank, which is supposed to operate independently. But that’s not to suggest they always see eye to eye.

Both Bush administrations, and the Clinton administration that came between them, squabbled with chairman Alan Greenspan, who cut the Fed’s rate numerous times in his tenure between 1987 and 2006, when he was replaced by Ben Bernanke, who hiked rates at the start before drastically cutting them heading into the financial crisis in 2007. 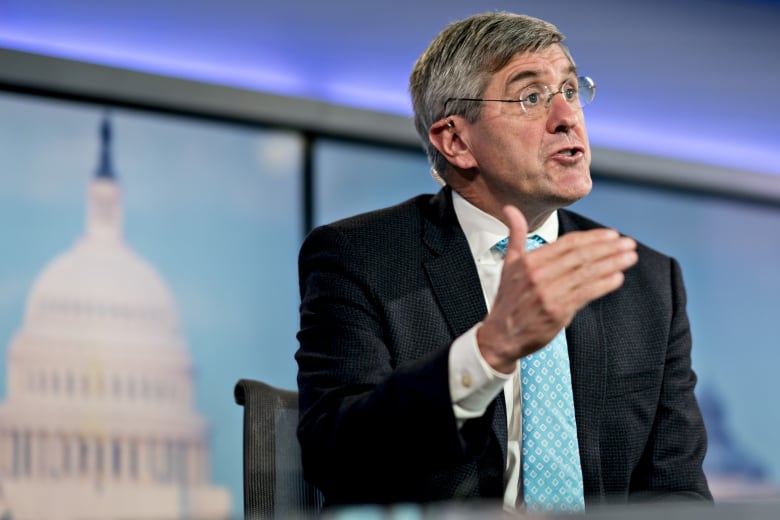 Stephen Moore has been suggested for a seat on the Fed board. (Andrew Harrer/Bloomberg)

In a previous generation, then-president Richard Nixon put pressure on more than one Fed chief to bend to his will on setting interest rates.

The Fed currently has an opening on its board, and Trump is tasked with nominating someone to fill the vacancy. Former Republican candidate Ben Carson was considered for the role, but in recent weeks conservative economic commentator Stephen Moore’s name has been floated.

“It will be a very problematic nomination,” Graham said. Asked if he would oppose Moore if nominated, Graham said he would study the pick.

Republican Senator Joni Ernst said it would be “very unlikely that I would support that person.”