On Wednesday in Switzerland, the Court of Arbitration for Sport will release its decision in the landmark case between Caster Semenya and the world governing body for track and field. The verdict could shape the future for not only track, but women’s sports as a whole.

Unfamiliar with the details of this fascinating, controversial and complicated case? You’re not alone. Let’s start from the beginning and work our way up:

Who is Caster Semenya?

She’s a 28-year-old middle-distance runner from South Africa who specializes in the 800 metres. She’s the 2012 and 2016 Olympic gold medallist in that event, and won world titles in 2009, 2011 and 2017. Semenya doesn’t hold any world records, but she’s a dominant force: Her victories at the most recent Olympics and world championships both came by big margins.

What makes her different from most athletes?

Semenya is believed to have been born with an intersex condition, meaning her reproductive anatomy doesn’t fall neatly into the traditional buckets of male or female. But her family in rural South Africa identified her as female from birth, and she has done the same her entire life. She has always competed as a woman and wants to continue doing so. Intersex should not be confused with transgender (someone whose own gender identity differs from their assigned sex) or transsexual (someone who does not identify with their assigned gender/sex and has a desire to change it through medical procedures).

Why is this a problem for track and field?

Semenya’s intersex condition causes her to be hyperandrogenous. That means her body produces much higher levels of testosterone than most women. Testosterone is the main male sex hormone, and it promotes secondary sexual characteristics like larger and stronger bones and muscles. It’s a big reason male athletes are generally bigger, stronger and faster than female counterparts — and why there are rules against athletes boosting their testosterone through artificial means like anabolic steroids.

So is Semenya trying to cheat?

No. She’s never tested positive for a banned drug, or even been suspected of doing so. She just naturally has a much higher level of testosterone than a typical woman. One result of that is she’s noticeably more muscular and broad-shouldered than her rivals. But body type alone doesn’t make someone a great runner. Winning Olympic and world titles in the 800 requires talent, skill, discipline and a lot of hard work.

But some people have a problem with her?

Yes. Some feel her higher testosterone levels give her a major (and unfair) advantage. Some of her competitors have publicly expressed this (usually in the heat of frustration right after she beats them in a race) and the International Association of Athletics Federations agrees with them. Track and field’s world governing body has been trying to pass testosterone limits for a few years now, but has had trouble proving how much of an advantage the hormone actually provides.

So what exactly does the IAAF want?

To go ahead with new rules requiring Semenya and other so-called DSD athletes (that stands for differences of sexual development) to bring their testosterone levels more in line with their competitors’. The IAAF is calling for this only in women’s running events ranging from 400 metres to the mile. The exact limit the IAAF wants to set is 5 nanomoles of testosterone per litre of blood (most women fall around the 1 to 3 range, and most men measure three times that).

The governing body says it accepts DSD athletes’ legal sex “without question” and its goal is not to ban them from competition or force them to run in men’s events. But it wants them to suppress their testosterone, which can be done with drugs. The IAAF says it’s doing this to protect fairness and the integrity of women’s sports.

What does Semenya want?

Just the status quo: to continue running in women’s events with her natural hormone levels. That’s why she challenged the IAAF’s latest attempt at setting a testosterone limit, which was supposed to go into effect last November. “God made me the way I am and I accept myself,” Semenya has said. She wants track and field to accept her too, and her camp is framing this as a human rights issue. 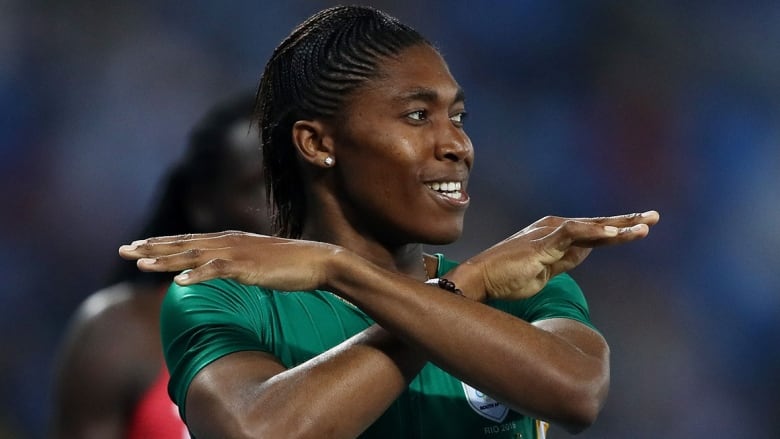 Semenya believes she has a right to keep running in her natural state. (Cameron Spencer/Getty Images)

What would happen if she reduced her testosterone?

Hard to say, but some suspect she’s tried this before (we don’t know for sure because Semenya hasn’t spoken publicly about it). If you look at her career arc, you’ll see that Semenya won her first world title as an 18-year-old back in 2009. Her dominant victory and muscular physique caused a stir right away, and the IAAF subjected her to what it called “gender verification” testing that reportedly showed triple the amount of testosterone expected in a woman. She was allowed to keep her title, but in 2011 the governing body introduced a new rule restricting “females with hyperandrogenism” to 10 nanomoles of testosterone per litre of blood.

Semenya went on to finish second at the 2011 world championships (held every two years) and the 2012 Olympics, though she was upgraded to gold in both after Russia’s Mariya Savinova was caught doping. Semenya didn’t even qualify for the 2013 worlds, and failed to make the 800 final in ’15. Shortly after that, the Court of Arbitration for Sport ruled in favour of an Indian sprinter named Dutee Chand who challenged the 10-nanomole testosterone limit. That decision allowed intersex athletes to compete without restrictions, and Semenya blew away the field at the 2016 Olympics and the ’17 world championships.

So why is Semenya fighting the IAAF again?

Because the CAS ruling in the Chand case didn’t kill testosterone restrictions — it only suspended them. The court gave the IAAF two years to make a better case that higher levels of testosterone give intersex athletes a significant advantage. The governing body came back in April 2018 with new data and the new five-nanomole limit for women’s races between 400 m and a mile (Interestingly, that leaves out the 100-m and 200-m events — Chand’s races). They were supposed to take effect in November, but Semenya challenged them to the CAS. And that’s where we’re at now.

No one knows. The fact the CAS’s panel of three judges is taking more than two months to reach and publish a verdict suggests it sees valid arguments on both sides.

On one hand, it seems easy to side with Semenya. Old definitions of gender and sex are softening as society bends towards greater inclusiveness. And you can see how a Semenya supporter might consider it an injustice to force an athlete to alter her body chemistry to conform to someone else’s definition of her gender identity. Some have also raised the issue of racial and cultural bias. The IAAF has always been run primarily by white, European men. Semenya is a black woman from the Global South whose body doesn’t match the traditional European ideals of femininity. Some believe the new rules specifically — and unfairly — target her.

On the other hand, the IAAF and its supporters believe they’re fighting for the very existence of women’s sports. Those are built on the premise that the best way to give women a fair chance to win is to exclude men — or, to put it another way, the people whose higher testosterone levels give them an advantage. Here’s what IAAF president Sebastian Coe said: “The reason we have gender classification is because if you didn’t, then no woman would ever win another title or another medal or break another record in our sport.”

Depending on your world view, the right side here might seem clear cut — and the other side completely insane. Just another reason the Semenya case is so hotly debated and so interesting, and why Wednesday’s decision is so important.

This piece is an excerpt from The Buzzer, the CBC Sports daily newsletter. Subscribe below.