After walloping the Caribbean as a tropical storm, Hurricane Dorian is forecast to hit somewhere along the east coast of Florida early next week as a major and dangerous hurricane.

And forecasters warn that Dorian could be a treacherous storm.

Along much of Florida’s east coast, as the storm approached, shoppers rushed to stock up on food and emergency supplies at supermarkets and hardware stores and picked the shelves clean of bottled water. Lines formed at service stations as motorists topped off their tanks and filled gasoline cans.

Keep up with Hurricane Dorian: Get USA TODAY’s Daily Briefing in your inbox

Florida Gov. Ron DeSantis declared a state of emergency throughout the state and asked President Donald Trump to declare a pre-landfall disaster as well.

Here are five things that make Dorian a dangerous hurricane:

It’s forecast to strengthen to a Category 4 hurricane

The latest forecast from the National Hurricane Center said Dorian is expected to reach Category 4 strength as it approaches Florida: “Dorian is forecast to become a dangerous major hurricane later and maintain that status as it heads for the northwestern Bahamas and the Florida peninsula.”

Infographic: An inside look at the birth and power of hurricanes

An upper-level low pressure system has brought some southwesterly shear, which has prevented Dorian from strengthening rapidly, the hurricane center said. But the storm is expected to enter a more favorable environment in the next day, “which should allow its structure to become more well developed,” forescasters said.

If it hits as a Category 4, with winds of 130 mph, the damage could be catastrophic: “Well-built framed homes can sustain severe damage with loss of most of the roof structure and/or some exterior walls,” the hurricane center said. “Most trees will be snapped or uprooted and power poles downed.”

A hit from a Category 4 hurricane means that “power outages will last for weeks to possibly months, and long-term water shortages will increase human suffering. Most of the area will be uninhabitable for weeks or months.” 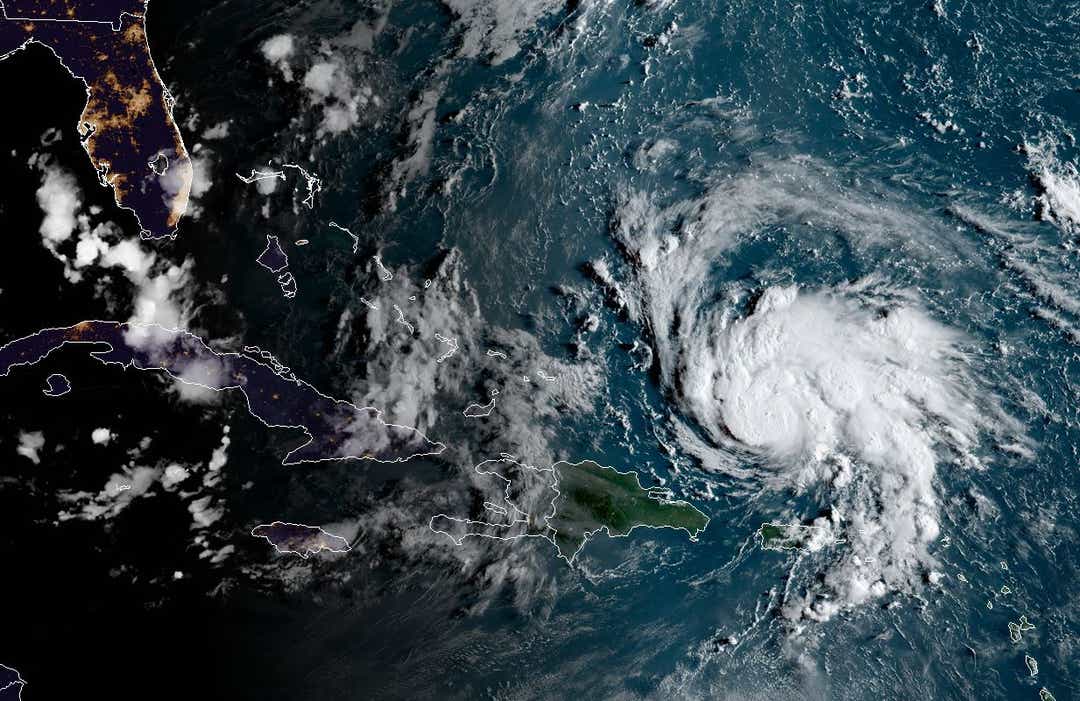 Although the current forecast shows landfall along the east coast of Florida, there is a chance the storm could curve up the coast before hitting land, perhaps even tracking into Georgia or the Carolinas.

The hurricane center said that the track guidance becomes less clear beyond 72 hours, primarily because of model differences in the strength of a ridge of high pressure over the Atlantic that will determine Dorian’s path.

“The spread of the … models and the various guidance is still considerable at days 4 and 5, and it is too soon to specify where along the Florida east coast the greatest impacts could occur,” the hurricane center said.

AccuWeather senior meteorologist Adam Douty said that “a very small fluctuation in the overall weather pattern will have a large influence in where Dorian ultimately tracks and how it impacts the continental U.S.”

Storm surge – the surge of seawater that comes ashore as a hurricane makes landfall – is often the deadliest and most destructive part of a storm. In fact, only 8% of hurricane-related deaths are caused by strong winds. Almost half are because of storm surge, the Weather Channel said.

The hurricane center warns that “the risk of life-threatening storm surge along portions of the Florida east coast has increased, although it is too soon to determine where the highest storm surge will occur.”

It could make a second landfall

Though it’s forecast to hit somewhere along the east coast of Florida, there “is certainly a chance that the storm could drift into the Gulf of Mexico and produce a second landfall,” noted University of Georgia meteorologist Marshall Shepherd in Forbes.

“For now, the entire Florida and Southeast coastal community should be on alert. Even if you live in the eastern Gulf Coast states, I wouldn’t completely take my eyes off of the storm yet,” Shepherd said.

South Florida is already sodden from an extremely wet August

It’s been a soggy month and summer in south Florida, so any rain that falls from Dorian will hasten and exacerbate flooding. How wet? Both Miami and West Palm Beach have seen over a foot of rainfall this month, which is about twice as much as average, the National Weather Service said.

And regardless of the exact track of Dorian, heavy rains are expected to occur over portions of the Bahamas, Florida and elsewhere in the southeastern United States this weekend and into the middle of next week. The hurricane center warns that as much as a foot of rain could fall from Dorian across the southeastern U.S.

“Dorian’s slower movement as it nears the coast could cause major flooding,” the Weather Channel said.