The CDC provided more detail on the possibility of coronavirus being spread by contact, while the NHL unveiled its plan to restart the season and New York had some optimistic news about how the state is dealing with the pandemic.

U.S. stocks roared higher Tuesday amid optimism that national and global economies were slowly awakening from their slumber despite a WHO warning that the world remains in the “first wave” of the pandemic. Still, states were beginning to open back up – although some large gatherings, such as a pool party at Lake of the Ozarks in Missouri, drew ire from health officials.

The United States is inching closer to a devastating milestone as the virus will soon be blamed for the deaths of 100,000 Americans. There are more than 5.5 million confirmed cases around the globe, with more than 1.6 million in the United States alone, according to the Johns Hopkins University data dashboard. Almost 350,000 people have died worldwide.

Our live blog is being updated throughout the day. Refresh for the latest news, and get updates in your inbox with The Daily Briefing. Scroll down for more details.

Need to catch up on the weekend’s news? We’ve got you covered.

Staying Apart, Together: USA TODAY brings a newsletter about how to cope with these trying times straight to your inbox.

What we’re talking about: A Michigan boy has recovered from a rare syndrome linked to the coronavirus with symptoms similar to Kawasaki disease. At least 33 children in the state have been diagnosed with the same condition. 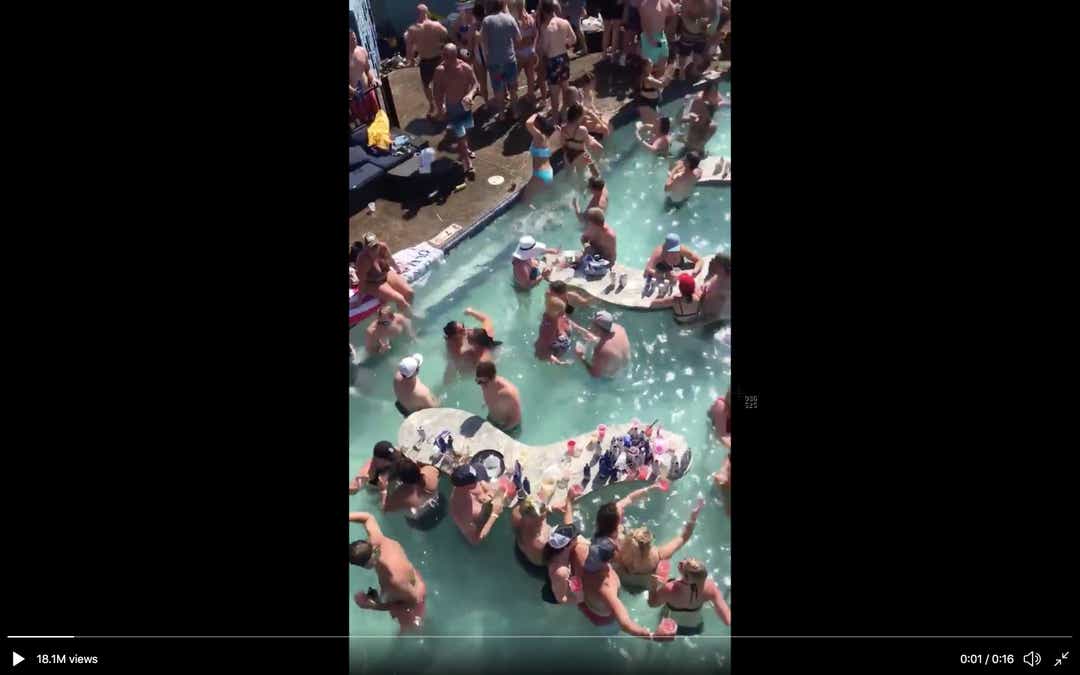 The Centers for Disease Control and Prevention released an update to their recent changes to the coronavirus guidelines. Two days after the guidelines said COVID-19 “does not spread easily” by touching contaminated surfaces or objects, the CDC clarified that the wording they used was “confusing.”

“This change was intended to make it easier to read, and was not a result of any new science,” the CDC said in a news release.

The agency had always warned that “it may be possible” to become infected with coronavirus by touching contaminated surfaces or objects although the primary way to get infected is through person-to-person contact. That statement still holds true with the recently updated guidelines saying: “This is not thought to be the main way the virus spreads, but we are still learning more about how this virus spreads.”

The NHL took a big step Tuesday toward completing its 2019-20 season amid the coronavirus pandemic. Commissioner Gary Bettman announced a 24-team playoff format that was accepted by the Players’ Association through a vote that concluded Friday.

The tournament will feature the top 12 teams in each conference, with seeds based on points percentage and calculated using every team’s record at the time of the pause. The top four seeds in each conference would automatically advance to the traditional round of 16, but seed Nos. 5 through 12 would have to play their way in.

More sports: Is there a better holiday on the sports calendar than Memorial Day?

Nick Cordero’s wife shared a health update Tuesday, citing “some improvements” for the Broadway star, who has been hospitalized for almost two months after suffering complications from the coronavirus.

“They saw some success with proning Nick,” Amanda Kloots said on her Instagram Stories, referring to a treatment technique being used amid the pandemic, where a patient is placed flat on their stomach with their chest and face down, as opposed to laying on their back, according to Health.com. “So they are going to continue doing that with him… There’s like 16-20 hour intervals that they do that. They are seeing some improvements with his oxygen and gas exchange rates when they do that. So that was really good and promising.”

Kloots said her husband has also been given “new antibiotics” and “a high dose of vitamin C” to aid his immune system.  “All these little things seem to be slowly helping,” she said.

Cordero was admitted to Cedars-Sinai Medical Center in Los Angeles in late March. Cordero has since faced several coronavirus complications, including a leg amputation and the insertion of a temporary pacemaker.

States are reopening, but many require travelers to self-quarantine

States are slowly beginning to open back up, but that doesn’t mean travelers are free to come and go as they please. USA TODAY has an update on the states that discouraged interstate travel by requiring or recommending that visitors and residents returning from other states quarantine for 14 days.

Some counties or municipalities have issued similar advice to travelers, so anyone looking to go on a trip or take a summer vacation should check government websites for their destination and anywhere they plan to stop overnight. Read your state’s plans here.

The Supreme Court refused the Trump administration’s request Tuesday to block a lower court order requiring stepped-up efforts against the spread of the coronavirus at a low-security federal prison in Ohio.

The high court’s action represented its most significant intervention to date related to the deadly impact of COVID-19 inside federal prisons.

The low-security Elkton Federal Correctional Institution in northeast Ohio faces a potential large-scale transfer of elderly, medically vulnerable inmates to less dangerous types of custody, including home confinement, under a federal court order. As many as 837 inmates could be affected out of a total prison population of some 2,500.

The high court refused to put the evaluation of those inmates on hold at the request of the Trump administration, “without prejudice to the government seeking a new stay if circumstances warrant.” Associate Justices Clarence Thomas, Samuel Alito and Neil Gorsuch would have granted the administration’s request.

Virginia Gov. Ralph Northam said Tuesday that everyone in the state “will need to wear a face covering” when present in any indoor space that is open to the public, starting Friday. “I’m taking this step because science increasingly shows us the virus spreads less easily when everyone is wearing face coverings,” Northam said.

Northam said there will be exceptions for those who are eating or drinking, exercising, have a health condition that prevents them from wearing one and for children younger than 10. Northam said that to prevent criminal citations, the order will be enforced through the Virginia Department of Health, rather than through law enforcement.

Northam’s announcement came after he was widely criticized for appearing in a crowded area in Virginia Beach over the weekend while he was not wearing a mask and not observing social distancing. Northam said he had left his mask in the car and was “unprepared” to encounter a crowd, but that he took “full responsibility.”

Northam said he expects Northern Virginia to advance to Phase 1 of the state’s reopening plan Friday, but that details would be available Wednesday.

As New York continues to ramp up its reopening plan, two vital coronavirus metrics have dropped to the lowest levels since the outbreak began, New York Gov. Andrew Cuomo said Tuesday. New coronavirus hospitalizations dropped to “the lowest level since this started, just about 200,” and the state reported 73 deaths Monday.

“In this absurd, new reality, that is good news,” Cuomo said.

Cuomo said he is scheduled to meet with President Donald Trump on Wednesday in Washington to ask for funding to bolster the state’s infrastructure projects. To resurrect New York’s economy and to capitalize on lower ridership from commuters, Cuomo said he wants to fast-track construction projects, like those at LaGuardia Airport and Penn Station.

Pandemic tough on wallet for almost half of Americans

Turns out being locked up at home isn’t always a moneysaver. Almost half of Americans (45%) say the pandemic has cost them financially, according to a TD Ameritrade survey that was given exclusively to USA TODAY.

“Some of the older generations are dealing with the realities of homeschooling and entertaining their children,” says Keith Denerstein, director of guidance product management at TD Ameritrade.

Poll: Most parents say they likely would not send kids to classrooms in fall

More than half of parents with at least one child in grades K-12 would be likely to pursue at-home learning options instead of sending their children back to schools if they reopen in the fall, according to an exclusive USA TODAY/Ipsos poll. Nearly a third of parents, 30%, say they are “very likely” to do that. And 1 in 5 teachers say they are unlikely to go back to school if their classrooms reopen, a potential massive wave of resignations.

“Though Americans are optimistic about a return to in-person learning, there is angst among teachers, parents and America at large about how to keep our schools safe if the virus isn’t fully contained,” said Cliff Young, president of Ipsos.

Anyone who failed to practice social distancing and other guidelines at a mega pool party in Missouri should self-quarantine for 14 days “if they have any compassion for others,” Kansas City Health Department director Rex Archer said. The party Saturday in Lake of the Ozarks, about 130 miles southeast of the city, drew national attention after a video went viral showing hundreds of swimsuit-clad partygoers in extremely close quarters.

St. Louis County Executive Sam Page asked his Public Health Department to issue a travel advisory as workers return to their jobs after ignoring social distance practices. Page said the “reckless behavior endangers countless people and risks setting us back substantially from the progress we have made in slowing the spread of COVID-19.”

Dire warning: ‘We’re in the middle of the first wave globally’

The risks of reigniting coronavirus outbreaks are complicating efforts to fend off further misery for the many millions who have lost jobs, with a top health expert warning that the world remains in the midst of a “first wave” of the pandemic.

Ryan, speaking at a virtual news conference, pointed to South America, South Asia and other areas where the number of infections is still on the rise. For nations that appear to have peaked or plateaued, Ryan warned that a second wave is possible a few months later. He urged Europe and North America to continue with a “comprehensive strategy to ensure that we continue on a downward trajectory and we don’t have an immediate second peak.”

The World Health Organization announced Monday a “temporary pause” on the inclusion of anti-malarial drug hydroxychloroquine in a global study on potential COVID-19 treatments. President Donald Trump claims he used the drug, which the FDA says is neither safe nor effective in treating the coronavirus, to help stave off the disease.

WHO director-general Tedros Adhanom Ghebreyesus said in a news conference that the executive group overseeing the organization’s “Solidarity” trial of experimental treatments decided to suspend its use in light of a study published in The Lancet that found a lower survival rate among hospitalized COVID-19 patients using the drug.

Hydroxychloroquine was one of four drugs and drug combinations included in the trial, which has enrolled more than 3,500 patients in 17 countries. Other potential treatments, including the experimental drug remdesivir and an HIV combination therapy, are still being tested.

The Trump administration’s ban on travelers arriving from Brazil to help prevent the spread of the virus will now take effect before midnight Tuesday, the White House announced. The ban had been previously planned to begin Thursday.

President Donald Trump announced the ban Sunday, prohibiting people who have been in Brazil within two weeks of attempting to enter the U.S.

Brazil is the second hardest-hit country worldwide, right behind the U.S.