Latest News
Home /Black history is this country’s history: George Floyd protests intensify across US, from Atlanta to Indianapolis to Tennessee

Outrage over the death of George Floyd sparked protests in cities across the nation on Friday night, hours after a former Minneapolis police officer was arrested and charged with his murder.

Activists say it’s just another example of systematic racism in law enforcement, the latest in a series of high-profile black deaths that have exacerbated and inflamed racial tensions nationwide.

Former officer Derek Chauvin is facing third-degree murder and manslaughter charges after a bystander’s video circulated of him holding his knee to Floyd’s neck for more than eight minutes before Floyd died.

A 19-year-old man was shot and killed late Friday night during protests in Detroit and violence in Atlanta captured national attention as the city’s mayor delivered an impassioned plea for violence to stop.

Demonstrators in many other cities also gathered to protest local deaths at the hands of law enforcement.

‘What’s it going to take to get people to listen?’:George Floyd protests in Minneapolis continue into fourth night despite curfew

In Indianapolis, they held a sign that read “Justice for Dreasjon Reed” — Reed died after a police pursuit that was broadcast on Facebook Live. In Milwaukee, they invoked the name of Joel Acevedo, who died after an altercation with a police officer in April.

In Louisville, Kentucky, on Thursday night, gunfire erupted as hundreds of protesters took to the streets demanding justice for Breonna Taylor, who in March was shot and killed in her apartment by police.

As protests continue into their fourth night in Minneapolis, here’s what’s happening in other cities around the nation:

Dozens of protesters wearing face masks — many with the communist group Revolution Club Chicago and the organization Refuse Fascism Now, which is calling for President Donald Trump’s removal — gathered in downtown Chicago and marched through the streets for hours.

The group chanted “say his name, George Floyd” and “black lives matter.” Some held signs that said “Justice 4 George and “I can’t breathe.”

At one point, the group blocked a major highway, stopping traffic as police created a barricade with their bicycles. The group left the highway and continued marching downtown.

About 8,000 people had expressed interest in a Facebook event page for a Saturday protest in Chicago, organized by Black Lives Matter.

Five people were arrested and two police officers were injured by protesters throwing rocks and bricks at them on the second straight night of protests in Ohio’s capital city.

Police also reported broken windows and spray-paint graffiti in the Short North. Business owners boarded up their buildings, and a couple stood outside well after midnight, with guns, to protect their properties.

Protesters converged earlier in the night on Columbus Police headquarters, where they staged a peaceful protest.

Denver: Police use flash grenades, tear gas to hold off protesters at Capitol

On the night after one protester appeared to be intentionally hit by a car, Denver police used flash grenades and tear gas to hold off protesters as they attempted to breach the Capitol multiple times.

People began to gather as early as 12:30 p.m. for a march to the Capitol, where protesters stood on the steps and chanted for change. They later took both sides of nearby North Broadway Street before heading to Civic Center Park to hear from speakers.

About an hour after the crowd had mostly dispersed, they regathered near the capitol, prompting law enforcement to push them back from the street to keep traffic moving through the area. Tensions escalated into the night, with some protesters seen running through the city and smashing storefront windows.

A protest outside Des Moines police headquarters spread through downtown and turned violent.

Just before 8 p.m., protesters appeared to throw bricks at police cars, prompting officers in riot gear to push against protesters. The scene escalated, with at least one officer spraying chemical irritants on the crowd, including a Des Moines Register photographer.

A 19-year-old man was killed late Friday night after shots were fired into a crowd of protesters by an unknown suspect in a gray Dodge Durango.

Video obtained by the Free Press of the USA TODAY Network showed the man bleeding from the chest, and police said he later died at a hospital.

About 1,500 people demonstrated peacefully earlier in the night, though Police Chief James Craig said nine people had been arrested as of 11 p.m. By 11:45 p.m., police had fired tear gas.

Officers were attacked during the demonstrations, Craig said. A command officer was struck with a rock and taken to a local hospital. Another officer on a bike was struck.

The Detroit Police Department is angry about the death of George Floyd, too, Craig said: “I will not stand by and let a small minority, criminals, come in here, attack our officers and make our community unsafe.”

Protesters clashed with police in downtown Indianapolis in an hourslong demonstration that started peacefully but turned chaotic violent after the sun went down.

Officers with the Indianapolis Metropolitan Police Department used multiple volleys of tear gas and rubber bullets in attempt to disperse crowds, who lingered on city streets well past midnight.

As police stood in riot gear, groups of protesters moved through clouds of gas chanting “I can’t breathe!” and “Black Lives Matter.”

George Floyd protests: How did we get here?

An IMPD patrol car was vandalized. Fires were set in trash cans. A CVS was torched and looted. Other stores, including a jewelry store and a cellphone store, were also looted.

Graffiti on a broken window at Key Bank at Market Tower read, “I can’t use my bank account if I’m dead.”

Hundreds of protesters gathered peacefully in front of police headquarters in Knoxville, Tennessee, in a rally hosted by Black Lives Matter Knoxville.

Davis Hayes, who ran for Knoxville City Council last year, led the crowd in a chant: “We have nothing to lose for our chains.” 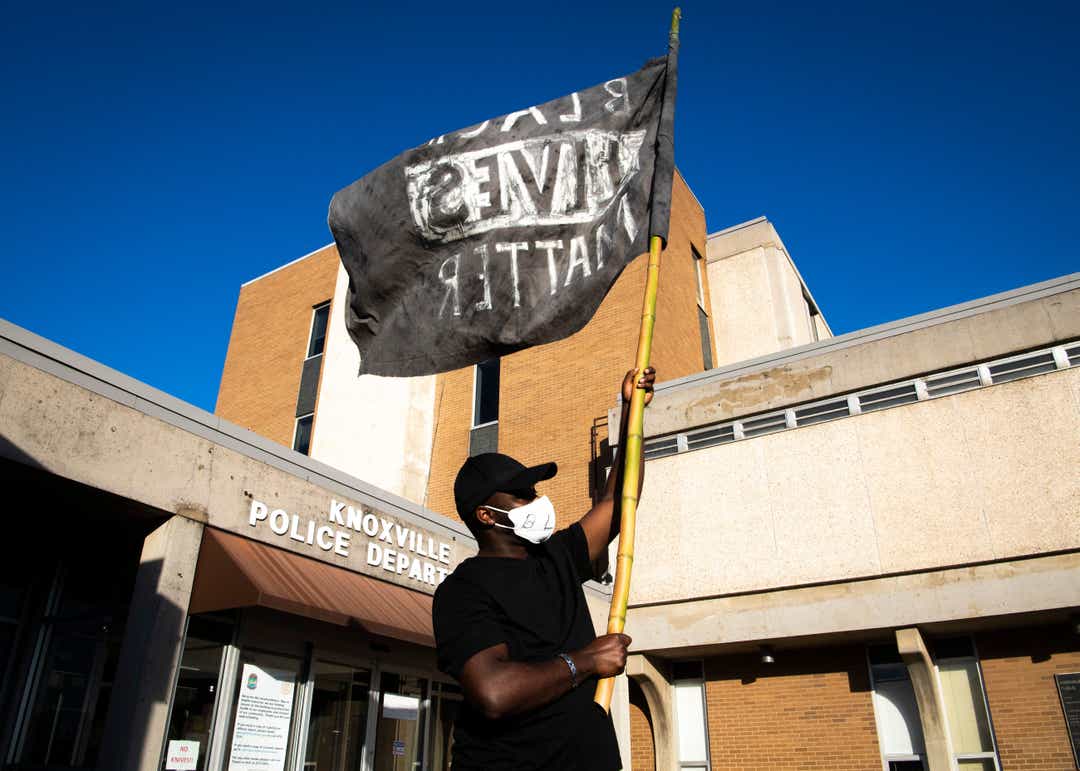 Alison Rose, who works with the National Alliance on Mental Illness, was the first white speaker at the protest, and she spoke directly to other white people.

“White people, get it together. Do the work. Educate yourselves,” she said into a microphone. “Get yourself so deep in history that you will find out the truth: Black history is this country’s history.”

The Los Angeles Police Department declared an unlawful assembly after 9:30 p.m. for much of the downtown area, from Interstate 10 to U.S. 101, and the 110 Freeway to Alameda Street, following a night of tense standoffs with protesters.

“This is being made following repeated acts of violence and property damage. Residents should stay inside. Business should close. Those on the street are to leave the area,” LAPD said via Twitter.

Around 9:30 p.m. reports of loud bangs came followed by tear gas. Earlier, protesters pulled down the American and Kentucky flags in front of the Hall of Justice and set them ablaze. Moments later, some protesters threw objects at the building’s glass doors, more items were lit on fire and there was three loud bangs went off.

A group of more than 1,000 people were estimated to be gathering around the Hall of Justice.

For the third straight day, protesters took to the streets of Memphis to speak out against police brutality and the recent deaths of three African Americans at the hands of police.

The first demonstrates arrived just before 6:30 p.m. Within an hour, the crowd had grown to about 300, the largest of the of the protests so far. 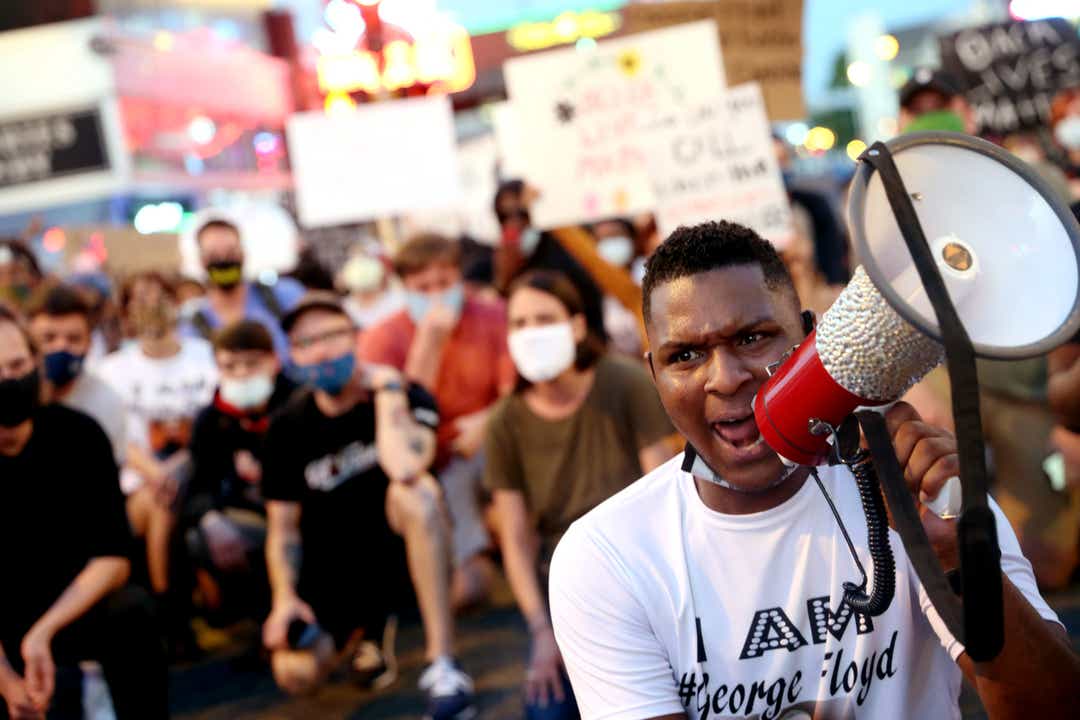 That was despite a series of road closures set up by the Memphis Police Department at every entrance into the area. While Wednesday, the overarching emotion seems to be anger, Friday night’s protest seemed to be about unity and healing.

Hundreds rallied to denounce the police killing of George Floyd and other acts of police misconduct across the country before marching to Interstate 43 and shutting down part of the freeway.

The protest began with a moment of silence to honor Floyd, who died Monday after a Minneapolis police officer kneeled on his neck for more than eight minutes as he was gasping for air and pleading that he couldn’t breathe.

“We’re here in solidarity,” said Vaun Mayes, a community activist who organized the event outside the Wisconsin Black Historical Society.

Hours later, another demonstration took place in the city’s Jackson Park neighborhood to protest the death of Joel Acevedo, who died after an altercation with an off-duty Milwaukee police officer. The officer, Michael Mattioli, is accused of putting Acevedo in a fatal “choke hold” during a fight at his house and has been charged with reckless homicide.

New York City: A ‘long night ahead’ amid escalating tensions in Brooklyn

New York City Mayor Bill de Blasio warned of a “long night ahead of us in Brooklyn” in a late Friday night tweet.

Reporters documented the unrest in social media posts: Earlier in the evening, New York Times reporter Nicholas Bogel-Burroughs tweeted a video showing a person being struck by the door of a passing police vehicle. And, Jason Lemon of Newsweek tweeted a photo of a police vehicle set on fire in the borough.

New York Rep. Alexandria Ocasio-Cortez tweeted that lawmakers were among the protesters who were caught up in the clash: “A Black New York State Senator (@zellnor4ny) and a Black NYS Assemblywoman (@YourFavoriteASW) were both pepper sprayed in Brooklyn today. They were present as elected leaders to keep the peace and serve their communities. Completely, utterly unacceptable.”

In Manhattan, hundreds of protesters descended on Foley Square, chanting “I can’t breathe” and “No justice, no peace!”

A vigil “to mourn the police violence” wrapped up shortly after 9 p.m. and organizers discouraged attendees from engaging in any violent protesting and instead urged them to go home.

While some left, hundreds of protesters began marching. Many had their hands in the air and chanted, “I can’t breathe.”

An organizer said violence would bring more pain to the family of Dion Johnson, who was recently fatally shot by an officer.

Police said 28-year-old Dion Johnson was shot following a struggle with a trooper on May 25. Initially, activist groups said Johnson was unarmed and asleep. They demanded release of the body-worn camera footage depicting the shooting.

Protesters marched through the capital of the Silicon Valley, temporarily stalling traffic for about an hour on a five-lane freeway and prompting police intervention.

Video footage from KGO-TV showed vehicles at a virtual standstill on the southbound lanes of U.S. 101 in San Jose until protesters moved into the downtown area. Police later fired tear gas and nonlethal projectiles into a crowd that had grown to about 1,000 people, and officers in riot gear lined up to prevent them from further disrupting traffic near city hall, KPIX-TV reported. 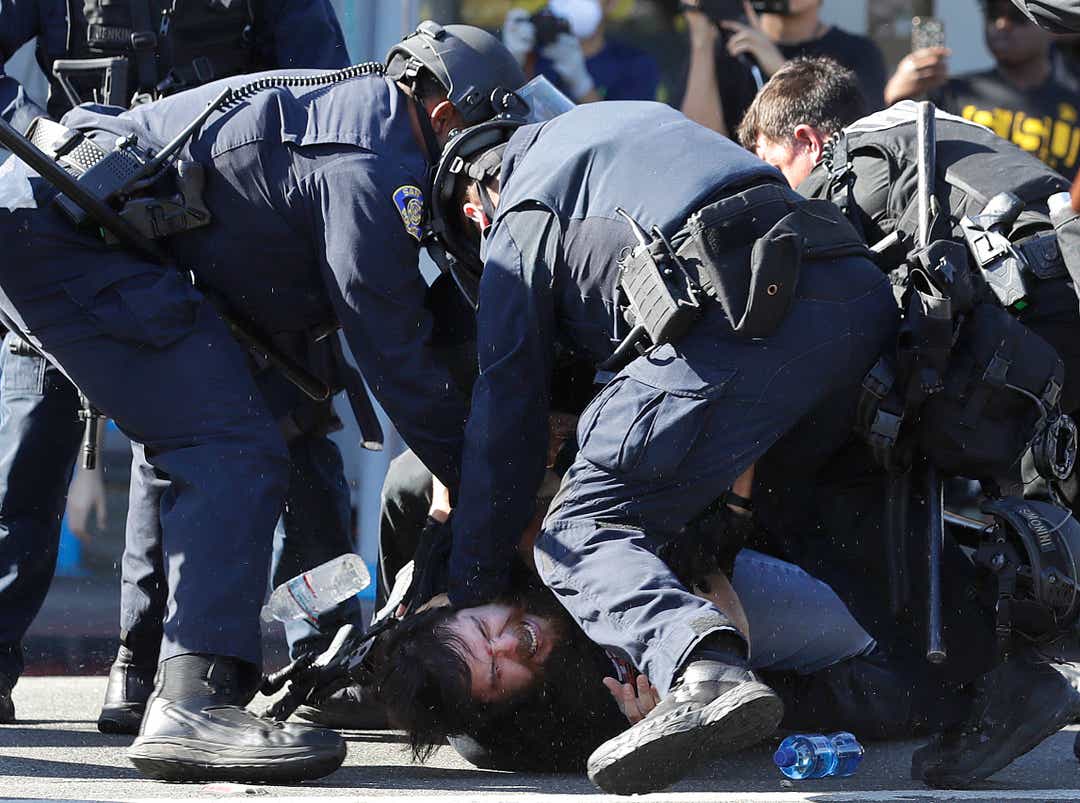 Protesters smashed the windows of police cars and threw water bottles, according to TV station.

Elsewhere in California, hundreds of protesters demonstrated peacefully on the streets in the capital city of Sacramento, gathering near a police headquarters and shouting at police.

Outside the White House on Friday, Secret Service could be seen after 7 p.m. taking at least one person into custody. Videos showed a large group of protesters gathering, with some burning flags and knocking over barricades. The protesters have moved from the White House to another part of the city. 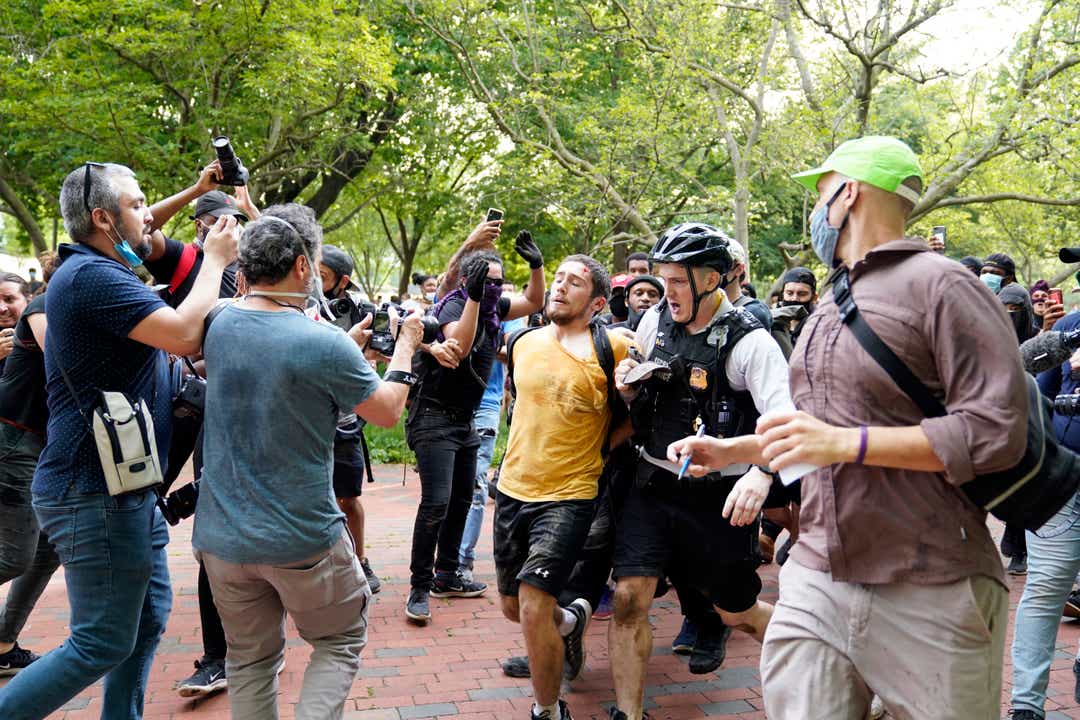 Multiple reporters posted that they were inside the White House and that the Secret Service was not letting them leave the grounds during the lockdown.