Latest News
Home /With $1 salary, Joe Moglia may be the biggest bargain in college football 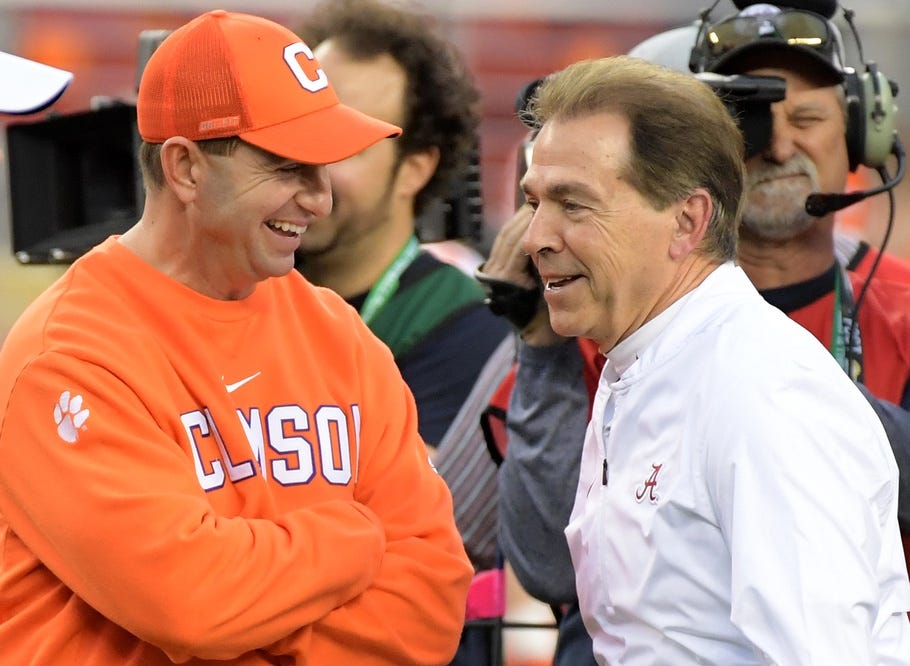 Has COVID-19 impacted College Football finances? Here are our 5 biggest findings from our coaches compensation database

SportsPulse: COVID-19 has wreaked havoc on much of the U.S. economy. How has it impacted college football coaches? According to our annual coaches compensation database, head coaches at power 5 conferences haven’t taken a a big hit.

On any given day, Joe Moglia could spend some of his time working on a $26 billion merger, being interviewed on CNBC, strategizing future non-conference football games for Coastal Carolina or advising a player about their future employment prospects.

The one thing Moglia won’t do is go watch practice.

“I still get a little emotional when I’m around the guys,” Moglia said. “And I don’t need that.”

Truth be told, Moglia doesn’t really need any of this. Whatever point he set out to prove to himself and the world back in 2009 when he stepped down as CEO of online brokerage firm TD Ameritrade to become a football coach, he’s long since made good. As unconventional as his path might have been, and many skeptics as he might have first encountered, his tenure at Coastal Carolina has been an unqualified success.

“Keep in mind that there has been nobody like me in the history of college football,” said Moglia.

That remains true today. Though Moglia handed the day-to-day coaching duties to Jamey Chadwell in 2019 following a seven-year run in which he won 72% of his games, Moglia has retained the title of executive director for football and chair of athletics — a decision-making role for which there’s no real blueprint in all of college football.

Database: How much each college football coach makes

As part of Coastal Carolina’s cutbacks amid the COVID-19 pandemic, Moglia agreed to forego his $177,000 annual salary and accept just $1 as a formality, making him arguably the biggest bargain in college athletics.

Moglia is not the only football coach or administrator taking a pay cut during the pandemic. But he’s very likely taking the biggest cut by percentage. USA TODAY Sports’ annual review of coaches’ compensation found pay-cut information for 99 coaches, more than 40% of whom have not seen a change in their pay. Of those who have volunteered for a pay cut, the average reduction amounts to 9% of their total compensation package for the year.

“I think the immediate place where it helped is (relieving) some of the deeper cuts that might have taken place somewhere in the athletic department,” Moglia said. “You do that in an effort to help out everybody else. You don’t just say, ‘We’re not worried about what else is going on or I can’t be touched.’ If you think that way, you’re not thinking right.”

Not that money was ever really a factor in Moglia’s coaching career. Though estimates of Moglia’s net worth are more speculation than fact, SEC filings indicate that his 2008 compensation package reached $21 million and was more than $10 million in other years. He didn’t go into coaching looking for a pay raise.

And since stepping down from coaching, Moglia has also devoted more time to his business interests. He’s the outgoing chairman of the board for TD Ameritrade and was part of acquisition negotiations with Charles Schwab, which were completed last week. Earlier this year he launched Fundamental Global New America, a so-called special purpose acquisition company, and remains a partner at Capital Wealth Advisors.

He also wouldn’t mind playing a little golf, a hobby he gave up in 2009 when he embedded with the Nebraska football program as a de facto intern for two years.

“I think I’m in the time of my life where I want to do things I find stimulating and rewarding, but I don’t want to work with people that I don’t want to work with and don’t want to do things I find a pain in the ass,” said Moglia, who turned 71 this year. “I think I can make real contributions and be very productive along those lines &mldr; but I don’t necessarily want the responsibility for everyone else or the future of an organization on my shoulders. I think i’m good at that and can still do it but that’s really, really a grind and it really does wear on you over time.”

Though Moglia started out as a high school coach and then an assistant at Lafayette and Dartmouth in the early 1980s before his rise in the financial world, his coaching vocabulary at Coastal Carolina always made him seem more like he was running a board room than a football program.

He would use words like “skill sets” that had nothing to do with running routes or perimeter blocking, and he created roles for people based on their core competencies and the value they provided to the organization.

It might have been non-traditional, but it wasn’t a gimmick. Under his watch, Coastal Carolina made the FCS playoffs four straight years and twice finished in the top 10 before making the jump to FBS and the Sun Belt Conference.

Moglia’s current role is harder to define within the strict paradigm of how we typically think about football programs. He doesn’t go to practice, doesn’t talk strategy with Chadwell and doesn’t decide to which players to offer scholarships. He is involved with budgets and scheduling and the big picture stuff. But at the end of the day, he is in charge of football as the reporting link between the head coach and the school president.

“I’m not running the program — Jamey is — I’m just responsible for it,” Moglia said. “It’s my responsibility to make sure we’re moving in the right direction and we’re in sync in terms of where we’re headed in the future.”

Asked exactly what that means, Moglia unsurprisingly compares it to being a CEO who is accountable for the success or failure of the company but doesn’t run day-to-day operations of technology department or the legal department or the finance department.

That may sound strange to somebody who is used to a typical arrangement of a head coach being in charge of everything in his program and reporting to an athletics director. But for an outside-the-box thinker like Moglia, it makes perfect sense to take advantage of what he can specifically bring to the table.

“You design the job for the skillset of the person you have. You don’t create a job and plop somebody into it,” he said. “I always said when I went to the business world the first time around, I thought I was much better at what I did because of my experience as a coach. I knew how to handle people, I knew how to handle myself under stress, and I was highly organized. But after having spent 25 years in the business world as a pretty senior person, I think I’m a much much better executive when I was a head coach or now as executive director of football in that role because of my experience as a senior guy in the business world.”

It’s unclear how long Moglia will continue to do that. The president who hired him, David DeCenzo, is retiring next year. Moglia said he’s looking forward to working with the incoming president, Michael Benson of Eastern Kentucky, but stressed that he serves at the pleasure of the president.

Given how successful Coastal Carolina has been — the Chanticleers are currently 3-0, with impressive wins over Kansas and Arkansas State — it seems like the school is getting quite a bit of bang from the $1 they’re paying him.

“With my experience when you’re talking about a budget or strategic planning or scheduling, I’m quite experienced in all those things,” he said. “You actually wouldn’t be taking advantage of all the skillsets that I bring to the table if I weren’t ultimately responsible for running it.”

How will Amy Coney Barretts…

I will be put out…

What we know about Marc…

Nancy Pelosi says she will…

As Dodgers take command of…