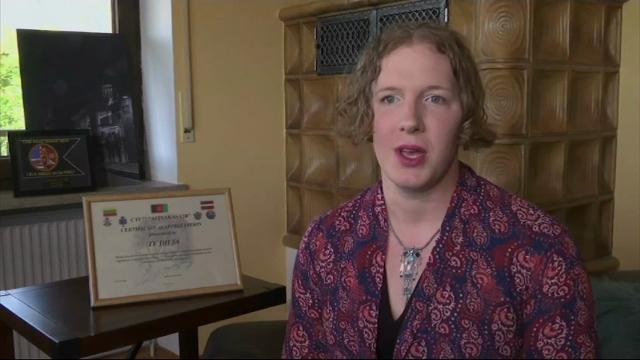 US Captain speaks out about being transgender

Even though the Pentagon says the policy allowing transgender troops to serve in the military won’t change until there’s official guidance from the White House, the uncertainty is unsettling for U.S. Army Capt. Jennifer Sims. (July 31)

Biden directed Defense Secretary Lloyd Austin to implement a policy that prohibits discrimination against troops based on their gender identity and requires the Pentagon to report within 60 days its progress in unraveling the ban.

“Allowing all qualified Americans to serve their country in uniform is better for the military and better for the country because an inclusive force is a more effective force,” according to a statement from the White House. “Simply put, it’s the right thing to do and is in our national interest.”

The directive to reverse the previous administration’s policy is one of Biden’s first moves to unravel Trump’s legacy in the military and elsewhere in government.

Austin signaled the planned reversal during his confirmation hearing Jan. 19 when he vowed to rescind the ban and “to create a climate where everyone fit and willing has the opportunity to serve this country with dignity.” The ban would have been lifted on Inauguration Day but Biden wanted to ensure more of his team was in place at the Pentagon to ensure its smooth implementation, according to an official with the transition team who was not authorized to speak publicly.

In 2016, the Pentagon under former President Barack Obama repealed a longstanding policy that had prohibited transgender troops from serving openly and allowed for them to receive counseling and medical treatment, including surgery. A study commissioned by the Pentagon found that overturning the ban would have minimal costs and effects on the readiness of troops to fight.

Trump had announced in July 2017 his intent to ban transgender troops by tweet, a move that surprised Pentagon brass. Amid court challenges, the Pentagon implemented a policy developed under then-Defense Secretary Jim Mattis that banned troops who required treatment for gender dysphoria.

Mattis said the policy was needed because treating transgender troops detracted from the military’s readiness to fight.

Gender dysphoria results from the conflict between physical gender and gender identity and should not disqualify troops from serving, according to The American Medical Association and other major medical and psychiatric organizations.

“Today, those who believe in fact-based public policy and a strong, smart national defense have reason to be proud,” Aaron Belkin, director of the center, said in a statement. “The Biden administration has made good on its pledge to put military readiness above political expediency by restoring inclusive policy for transgender troops. The ban will now be replaced with a single standard for everyone that, as in the successful previous policy, will apply equally to all service members.”

Retired Army Col. Sheri Swokowski, a transgender veteran whose doctoral dissertation focused on barriers to care for transgender troops, said the Pentagon has failed to provide adequate care, noting that some troops wait years for required surgery or choose to pay for it on their own.

“The process is so sluggish an increasing number of service members have chosen to avoid the DoD process entirely, despite incurring five-figure costs, to best support unit mission timelines and meet individual health needs,” Swokowski said.

Resistance from commanders and red tape led one soldier to pay more than $24,000 for her own treatment.

The soldier, who knew she was trans at age 13 or 14, joined the Army at 17. Now 30, she’s a senior enlisted soldier and has served a one-year deployment to Afghanistan. She talked about her experience on condition that she not be identified over concerns of retaliation.

She had thought about leaving the Army to complete transition treatment but re-enlisted in 2015 when she heard that the Pentagon was considering repeal of the ban on transgender troops. She began paying for her own treatment but found military medical providers were not supportive, she said.

After the policy was rescinded in 2016, she had her name changed. A year later, after Trump’s policy ban by tweet, things worsened. She was forced to cut her hair, she said. She continued to have issues with some commanders through 2018 but none with her peers, she said.

She continued to pay for her own surgeries and used her leave time for recovery. The military should pay for the treatment, just like any other medical condition, she said, but troops should recover on their own time and not let it affect their jobs.

Cities responsible for the road…

Report: Tiger Woods was on…

Surgery for a child, car…

Daring moves for all 32…

NBA remains committed to all…